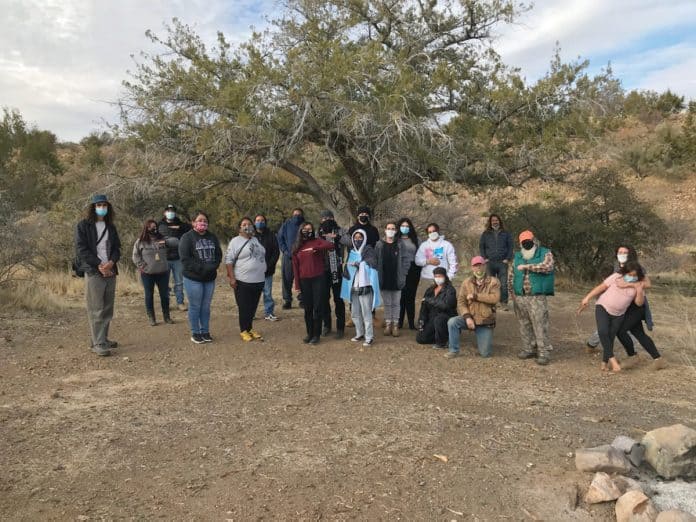 The Salt River Pima-Maricopa Indian Community is more than just a reservation with a border. There is a whole history here, and our sister tribes share the same history. Just because the reservation has a border, that doesn’t mean that there is nothing beyond the borders related to the O’odham or Piipaash. Central and southern Arizona are home to widespread sacred lands of the O’odham/Piipaash, Apache and other Indigenous people.

Right now, Native tribes across central Arizona, especially the Apache clans, are again fighting the establishment of a copper mine at Oak Flat, Arizona (Chi’chil Bildagoteel). The Trump administration has fast-tracked the Resolution Copper Project and Land Exchange, moving up the final environmental analysis by a year, to January 15. According to a press release from the Center for Biological Diversity, “If the final environmental analysis is published, the federal government will have up to 60 days to transfer the land to international mining giant Rio Tinto, which plans to destroy it with a huge copper mine.

“The Oak Flat land exchange is one of several environmentally damaging projects around the United States that the Trump administration is rushing to approve before the president leaves office.”

Needless to say, many are opposed to the mining operation. Community member Marina Thomas took time over the holidays to go and see the area before it’s destroyed.

On December 31, Thomas and 23 other people went to the area to pray and to connect with others who share the same passion, some of whom are members of Gila River Akimel O’odham and the Tohono O’odham communities. They were there for over six hours. Thomas explained what exactly the group intended to do and how the gathering went.

“The purpose of this gathering was to connect tribal members with our cultural roots embedded in the land before they are potentially destroyed,” Thomas said. “It was a chance for prayer on sacred land. We were hoping … to keep the culture alive, and to offer the next generation a memory of seeing these sacred sites. That we were able to achieve, but also just as important, we were hoping to bring to light the entirety of the mining project. Protect Chi’chil Bildagoteel (Oak Flat) has been a long-standing battle between the Apache people and Resolution Copper. However, there are additional land sites that Resolution Copper plans to use for the mining project, posing devastating environmental impacts for all of southern Arizona. The site which we visited would be a waste tailing project, a valley which would be lined with plastic and dammed up to hold billions of tons of toxic waste, threatening the local wildlife, land, air and water.”

Thomas clarified the future of this area as of right now.

”Currently, the Apache Stronghold is in a lawsuit to protect the numerous culturally significant sites that are being threatened by Resolution Copper’s mining project, but government officials continue to move forward on the project,” Thomas said. “Unfortunately, just days after the gathering, it was announced that [President] Trump would approve the mining company’s FEIS (Final Environmental Impact Statement) on January 15, which would be a final step in completing a land transfer of Oak Flat from the U.S. Forest Service to Resolution Copper. With all of the political changes taking place and little time left for crucial decisions made, we, the land and culture defenders, will continue to pray for the health of our future.”

Over the course of Donald Trump’s presidency, he has made it easier for corporations to bypass regulations in favor of increasing profits. An National Public Radio report, “Trump Overhauls Kay Environmental Law to Speed Up Pipelines and Other Projects,” explains how the Trump administration “reduced the types and number of projects that will be subject to review under the National Environmental Policy Act.” Ultimately, that makes it easier for agencies to speed up the process for building projects.

With President Joe Biden now in office, it is hoped that his administration will look into the changes the Trump administration has made that favor corporations at the expense of sacred lands and the environment and try to turn those around. Whether or not it can be done in time to save Oak Flat is unknown.

February 26, 2021
In this episode Marissa Johnson catches up with Miss Salt River, Isabella Dockerty. We also have a story on Community Artist Rainboe Duarte, Community...

Prime Kicks and Cuts Expand with a New Location