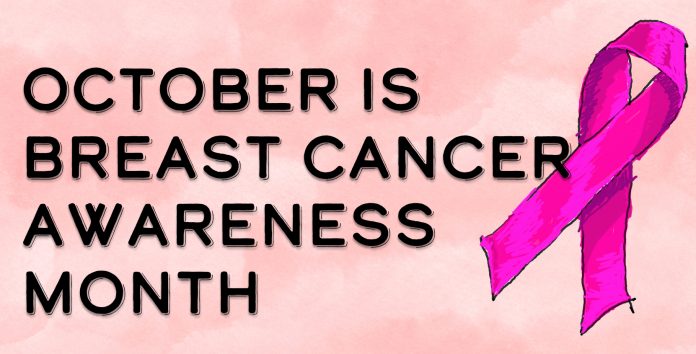 October is National Breast Cancer Awareness Month, a great time to highlight the importance of breast cancer awareness through education and research.

According to the National Breast Cancer Foundation, breast cancer develops when cells in breast tissue grow abnormally and form masses or tumors that can progress into cancer. Breast cancer usually begins either where the milk is being produced (in the lobules, called lobular carcinoma) or in the milk ducts (ductal carcinoma).

These and other breast cancers affect more than 250,000 women each year in the United States. About 42,000 of them die from the disease each year, according to the U.S. Centers for Disease Control and Prevention. Although it is not common, men are also at risk of developing breast cancer. The American Cancer Society estimates 2,620 new cases of invasive breast cancer in men for the year 2020, with about 520 men dying from it.

A mammogram is the best way to find breast cancer early, when it will be easier to treat. It is important for women 50 years old or older to schedule a yearly mammogram. Breast cancer can also affect younger women, who should learn how to do a breast self-exam. The self-exam is a quick, five-step process that any woman or man can do in the privacy of their own home, once a month. If you feel or notice any changes between exams, be sure to tell your doctor.

Breast cancer symptoms include changes to the breast size, shape or color. Watch for any pain in the area of the breast, discharge from the nipple other than milk, a “dented nipple,” or a lump in the breast or underarm. If you have experienced any of these symptoms, talk to your doctor right away.

Salt River Pima-Maricopa Indian Community member Angie Silversmith was diagnosed with breast cancer in 2009. By the time doctors found it, it had advanced to stage 3. She didn’t let this news slow her down or stop her from fighting.

Her lump was detected during a screening mammogram. “I was diagnosed in July 2009 and I went and did the nuclear test so they could see the lymph nodes. They took 19 lymph nodes out, and 11 of them had cancer,” said Silversmith. Surgery came next, a lumpectomy to remove the cancer. “In September 2009 they put in a port, and on the first Monday in October 2009 I started my chemotherapy. I ended chemo in March of 2010, and a couple of weeks after that I started radiation treatments to kill any remaining cancer cells. I had to do [the radiation treatments] every day for four weeks.”

Silversmith didn’t want to worry people, so she kept her diagnosis to herself, only telling her immediate family and closest friends. “When you hear ‘cancer,’ you think of death. It was pretty scary,” explained Silversmith.

“I really had to pray about it and told myself to be positive. I tried to live my life as normally as I could. I drove myself to all of my appointments for chemo. I did have my daughter-in-law take me to a couple of serious appointments where my heart could have stopped during the procedure. She was worried about me and insisted that she go with me,” said Silversmith. “I told my children, but I didn’t get into too much detail. I know they were upset, but I just told them to pray for me and be strong for me. I do believe there is power in prayer. I know that is what helped me through—everyone praying for me, my family and friends.”

Silversmith went into battle with this disease knowing she would face some side effects that would possibly be with her for the rest of her life. She explained that the radiation treatments affected one-third of her lung tissue, and she now has neuropathy in her feet because she was allergic to one of the chemotherapy drugs.

“I was eight months behind on getting my mammogram done,” said Silversmith. “Sometimes I wonder if I didn’t hold off on the mammogram for so long, it would have been caught sooner. But thankfully it was found and taken care of.”

Now she has a mammogram every year. “It’s hard to remember to set a day to have a mammogram done because we are all so busy,” she said. “Pick a day you would remember, like your birthday or someone else’s birthday. Also, learn how to do [breast] self-examinations. I wasn’t doing [them]. I never thought I would get cancer, but I don’t think anyone thinks they will get cancer. You have to be aware and be prepared.”

Silversmith advises anyone newly diagnosed with breast cancer to be strong and be positive. “Try not to overreact, because the treatments and medicines have advanced in the last 10 years, and they continue to get better and better each year.”

December 3, 2021
Tempe Butte in downtown Tempe, also known in O’odham as Oidbaḍ Do’ag and in Piipaash as Xwe Nyakuuly, is a culturally significant site for...

Community Recreation Employees Move On After Years of Service

Yoga in the Outfield at Salt River Fields