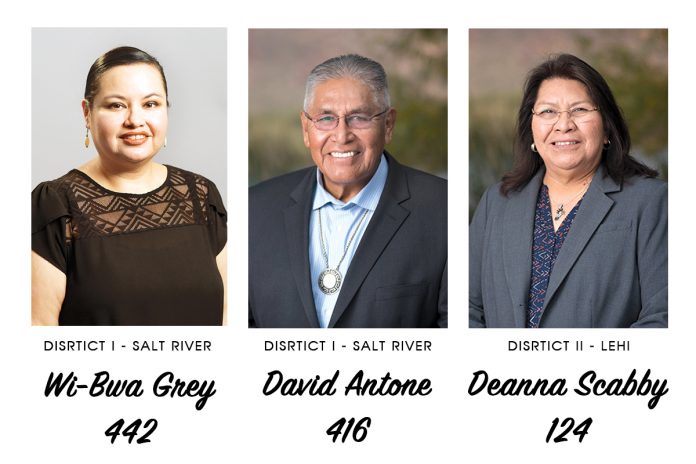 Salt River Pima-Maricopa Indian Community members 18 years and older had the opportunity to get out and vote in the 2020 SRPMIC General Election. The terms of Council representatives Wi-Bwa Grey, Archie Kashoya, and Deanna Scabby are expiring this year, making three Council representative seats available including two for District I (Salt River) and one for District II (Lehi).

All nominees had to be eligible to run for a seat on council, eligibility for a council seat included

Community members stopped by their polling sites for District I (Salt River) at the Salt River Community Building and the Lehi District II voters went to the Lehi Community Building. This year voters who went in person had to take extra safety precautions as they went to vote, wearing face masks/coverings and follow social distancing guidelines by staying six feet apart.

SRPMIC Council and the nominees gathered at the Salt River Community Building as the results were announced and certified by the Election Board. In District I, Wi-Bwa Grey was re-elected as she received 442 votes, followed by David Antone with 416 votes. In District II, voters re-elected Deanna Scabby with 124 votes.

“It feels good to be re-elected, it was hard especially during the pandemic to campaign and get to know the Community so I had to think outside the box in order to connect to the Community,” said newly re-elected Council representative Wi-Bwa Grey after hearing the results of the election. “My heart and best interest are serving the Community and we’re servants as Council members; if anyone has any questions or concerns, I am here.”