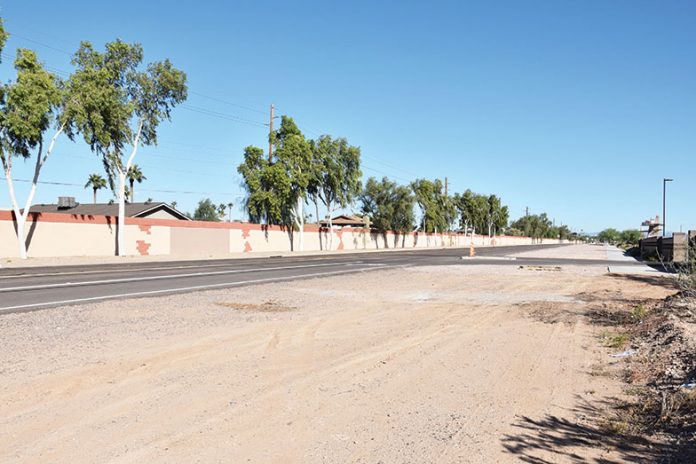 In a partnership between the Salt River Pima-Maricopa Indian Community and the City of Scottsdale, the Pima Road and Granite Reef Watershed project is expected to begin construction in spring 2023.

The project is currently in the design phase, and based on the latest schedule, the design phase is expected to be completed by November 2022. Construction is anticipated to end by spring 2025, with an expected completion time of two years.

Other partners on the project include the Arizona Department of Transportation (ADOT), the Flood Control District of Maricopa County (FCDMC), the Maricopa Association of Governments (MAG) and the Federal Highway Administration (FHWA).

The project was created in response to ongoing commercial development along the Community’s commercial corridor, for which Pima Road is the access road and a major regional north-south reliever roadway for the Pima Freeway (Loop 101).

The Pima Road corridor has seen significant development, such as Salt River Fields at Talking Stick, the Scottsdale AutoShow at Salt River, various hotels and other businesses.

“This development has led to increased traffic and overall general use of the area. The existing road and intersections are not built to handle the expected growth along the corridor. As you drive along the corridor, the road is fragmented between two lanes and four lanes,” said a representative for SRPMIC Public Works.

In that span of time, Pima Road has been improved in sections by the Community or other developers.

“The new road will look much like Pima Road between Talking Stick Way and Via de Ventura.”

Traffic volumes along the project route currently range from 5,000 to 12,000 vehicles per day and are expected to increase as more development occurs. SRPMIC Public Works said that the road will be widened from 30 feet to 77 feet. Sidewalks will be installed by each developer.

To help push the project forward, the SRPMIC was able to secure grants. In 2019, the Community was awarded a $49.8 million grant from the Federal Highway Administration to complete the full improvements to Pima Road recommended in the 2009 DCR.

The Nationally Significant Federal Lands and Tribal Projects (NSFLTP) grant was also awarded to the Community based on the Pima Road corridor’s need to improve safety, mitigate flooding impacts, alleviate traffic congestion, improve bike and pedestrian features, support economic vitality and growth, and to keep the road in a state of good repair. Currently, the Community is working on the design of the recommended improvements.

In addition to the presence of road workers and equipment in the work zone, construction activity will cause restricted access and detours to adjacent businesses. SRPMIC Public Works said that every effort will be made to limit the duration and lessen impacts to businesses, with limited full closures of Pima Road and a goal to maintain two-way traffic throughout construction.

Due to the COVID-19 pandemic, traditional open-house public meetings have not been scheduled to discuss this project and other projects. Instead, virtual public meetings began in June 2021 and continue as opportunities arise.

The project has a website, www.pimaroadimprovements.com, which provides project information, including a narrated presentation and a project information video that was presented at various district meetings at which Community members had the opportunity to ask questions and make comments.