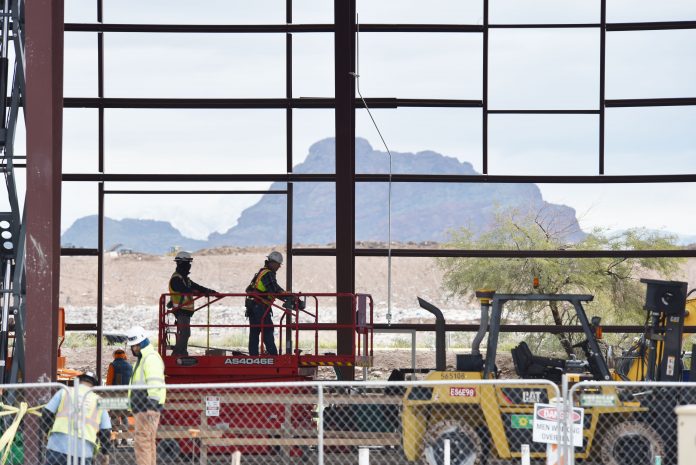 In October 2019, the recycling facility operated by Republic Services at the Salt River Landfill burned down. Since then, some local governments across the Valley have faced tough decisions about how to move forward with their recycling programs.

Now, Republic Services is rebuilding an updated and more advanced recycling plant on the same land.

“Republic Services is looking forward to opening our new recycling facility in the next few months,” said Republic Services area sales manager municipal sales Michael Celaya. “The Salt River Pima-Maricopa Indian Community has been an important partner in this project, and we look forward to continuing our collaboration.”

Construction for the new, approximately 51,000-square-foot facility began last June; it is slated to be fully operational by this May.

“There’s a lot of people in the Valley right now waiting on this plant to open,” said Salt River Landfill CEO Rich Allen.

According to Allen, the early projection for the cost of the project paid for by Republic Services is approximately $7.5 million.

Republic Services said that the new facility will be equipped with the latest recycling processing technology and will create jobs for neighboring residents and help their community partners meet their own diversion and sustainability goals.

The Salt River Landfill will cover a portion of the cost of a large fire-suppression tank filled with approximately 400,000 gallons of water that will be sitting in reserve nearby at the landfill, which the Community required to be built out of concern for any future fires at the recycling plant. For the recycling facility, the tank will be accessed through the sprinkler system and through the fire hydrants; and for the Landfill, the water could also be used for fires of its buildings through the fire hydrants.

“The fire allowed [Republic Services] to redesign the processing equipment, so they can put in optical sorters that can recognize [different recycling materials] and make things easier through robotics,” said Allen.

About 30 staff worked at the previous facility. The automation of the new equipment that was shipped in from Quebec means that the new facility will require a staff of only about 18.

Installation of the equipment will begin sometime in January. The equipment will mainly sort cardboard, paper, plastics, glass, aluminum and steel cans. Anything that cannot be recycled will go to the landfill.

“Not only is it safer, but it’s also better aesthetically,” said Allen.

The equipment in the previous facility was about 20 years old at the time of the fire, and Allen said that it was designed predominantly to capture newspaper, a big commodity then. Today, newspaper readership has declined and there is not as much newspaper being recycled as before.

“Recycling has changed so much—not only with the newspapers, but there’s more cardboard, you know, with Amazon [and other delivery companies],” said Allen. “There’s been a lot of ‘lightweighting’ in the industry. Your bottle used to be a more heavy plastic, and now they’ve reduced it [to be lighter in weight]. So, it takes a lot more bottles to make a ton now.”

The previous facility had three loading doors; the new building will have five.

The City of Scottsdale has been hauling some of its recycling materials to City of Phoenix facilities, but now Scottsdale is expected to switch to this facility.

According to Republic Services, other Valley cities that will be using the facility include the City of Mesa, City of Chandler, Town of Gilbert, Town of Fountain Hills and Anthem. The SRPMIC’s Public Works Sanitation–Solid Waste division will also begin collecting recyclables from the Community to transfer to the new plant.