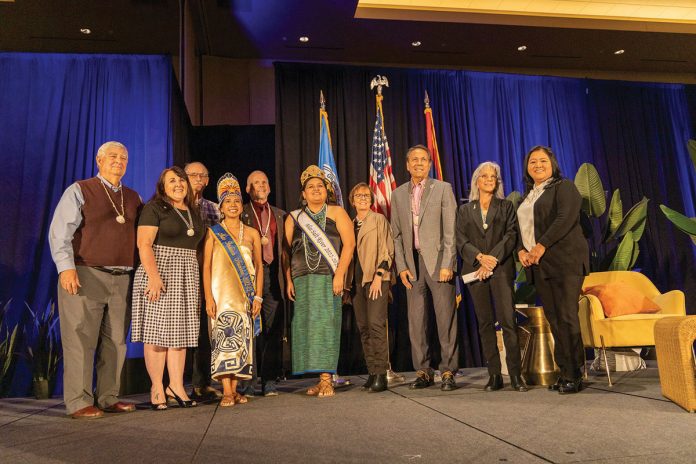 On October 31, a special luncheon was held to commemorate the partnerships that the Salt River Pima-Maricopa Indian Community has enjoyed with local municipalities and organizations through the state’s shared gaming program. The 12 Percent Gaming Luncheon was hosted by the SRPMIC to recognize the Community’s partnerships with 63 nonprofits and 12 cities across the state of Arizona.

“Our history tells us that our ancestors shared with those that came into our territory. Today, we have been given that same opportunity to be able to share with our neighbors,” said SRPMIC President Martin Harvier, who noted the Community’s generosity through time. He reflected on the Community’s ability to develop relationships with its neighbors and how that has become part of the “growing fabric” of the East Valley and the state.

The luncheon was opened by newly crowned Miss Indian Arizona and Miss Salt River 2021-2022 Sistine Lewis and current Miss Salt River Nani Reina. Council Member Tom Largo offered a brief welcome to the guests and thanked them for their participation in the 12 percent gaming program.

In keeping with tradition, SRPMIC Vice-President Ricardo Leonard presented a blessing and a traditional O’odham song to welcome the guests. This was followed by a rendition of the national anthem by former Miss Salt River Isabella Dockerty. Students from Salt River Elementary School were also present to provide a round of traditional O’odham and Piipaash songs and a round dance.

During the luncheon, Harvier noted that, to date, more than $1.6 million in gaming revenue has been shared with the state of Arizona and nearly $220 million has been awarded to the tribal 12 percent programs. He said the partnerships continue to grow, and with the amended compacts of last year, the state as a whole benefits.

Grants have been awarded to public safety agencies including the St. Johns Police Department and the Hellsgate Fire District in northern Arizona. Other organizations that have benefited from gaming revenue include the Phoenix Zoo and Hospice of the Valley, both of which have been longtime recipients of the grant funding.

“The first time we received funds from the Community was in 2004, and so it has been 18 years. We have a long history of partnership with the Salt River Pima-Maricopa Indian Community,” said Bert Castro, president and CEO of the Arizona Center for Nature Conservation/Phoenix Zoo. He said the Phoenix Zoo is a nonprofit organization, so the grant funds are critical to their mission of preservation and rescue of endangered wildlife.

Cheryl Thomas, director of fund development for Hospice of the Valley, said, “[The grant funding] helped provide charity care for our patients. As a not-for-profit hospice, we care for everybody who comes to us in need, regardless of their insurance status or financial resources.”

Afterwards, awards were presented to the heads of local municipalities and governments across the Valley, from Apache Junction to the City of El Mirage. Special plaques were presented by Council Member Cheryl Doka and Miss Indian Arizona Sistine Lewis and Miss Salt River Nani Reina.

To conclude the event, President Harvier presented Council Member Tom Largo with a plaque in appreciation of the years of service he has provided to the Community and as a member of the 12 Percent Gaming Committee from 2003 to 2022.

“I wanted to take this time out to recognize Council Representative Tom Largo for his years of service on the 12 Percent Committee and to the Community,” said Harvier. “[He]has been a supporter of you and your organization receiving funds from the 12% committee.”

Harvier presented Largo with a Holy Bible in recognition of his devotion to religion that was a big part of his years of service to the Community. He was also presented with a plaque inscribed with a thank-you message and a Bible verse.

Largo I want to thank my colleagues [all] of my council members, who I have been able to serve with and all of you for what you do for the population that we serve.

In addition, he said, “You are great people and we’re just proud to be a part of [you] and [your] organization. To conclude his remarks, Largo blessed the Community’s partners and the country for prosperous times ahead.