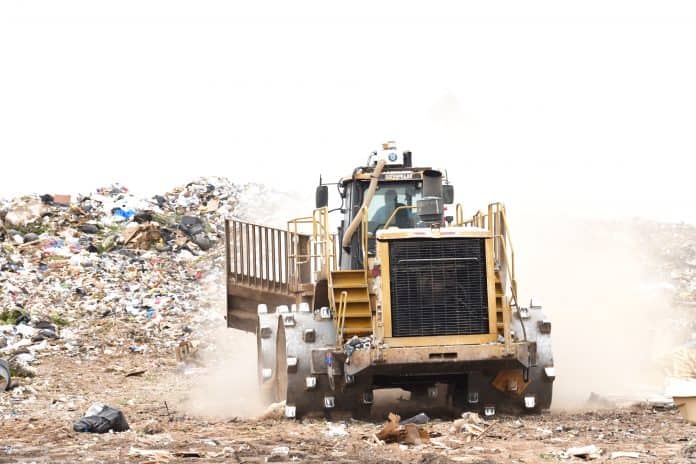 The Salt River Pima-Maricopa Indian Community is covered by the federal plan, which also imposes testing, reporting, monitoring and recordkeeping requirements on 41 states and the U.S. territories of the Virgin Islands and Puerto Rico.

Salt River Landfill CEO Rich Allen talked with O’odham Action News about what the future holds for the landfill and what day-to-day operations currently look like.

Allen said that the landfill is trying to find a beneficial use for the gas produced by the decomposition of the waste. Up until about five years ago, the gas was being sent to a power plant operated by SRP, and they used it to generate power. SRP closed that plant, so the landfill is working on a plan to convert that gas into renewable natural gas. The project is ongoing, but Allen said that he hopes the landfill can move forward on the plan in the next couple of years.

The landfill has an approved height in its existing location and the capacity is based on how much space is available. The more waste coming into the landfill, the less time that capacity will last.

“Presently we’re looking, based on our existing tonnages, to get beyond [the year] 2050 or so,” said Allen. “But we have seen an increase in tonnage recently, so if that continues, [landfill capacity may be reached before then]. Everything is tied to how much [waste] is coming in.”

One of the things the landfill is looking at is whether it makes sense to create another area to fill beyond the current space allotted by the Community. This would extend the life of the landfill and open up the opportunity to solicit additional tonnage to increase the amount of revenue the landfill produces.

Allen said that the landfill adds an average of about 1,500 to 1,600 tons of waste per day. Mondays are usually the heaviest day and Saturday the lightest.

The landfill gets its revenue predominantly from its contractual relationships with the cities of Scottsdale and Mesa. Those cities bring in the majority of the waste, with some also coming from Phoenix, the Fort McDowell Yavapai Nation and various companies.

The Salt River Landfill works with two contractors; one operates the green waste area and separates waste that cannot be composted. They grind up the matter and haul it to a facility in Phoenix to finish processing it into various landscaping products. The other contractor owns and operates the recycling plant. That plant caught fire and was destroyed in October 2019. Presently, the contractor is going through permitting options with the Community for rebuilding the facility. This would also give the recycling plant updated equipment.

The Salt River Landfill employs 32 workers, primarily SRPMIC members. “We employ other Native Americans and non-Natives who are married to Community members and live within the Community,” said Allen. “We have one of the highest percentages of any of the SRPMIC enterprises for employing Community members. That’s one of the things we’re proud of.”

The SRPMIC Community Development Department and the Salt River Landfill will be making presentations on “The Future of the Landfill” at Community District meetings in the months of July, August and September. Be on the lookout for further information regarding these presentations.

The landfill is currently open to the public Monday through Saturday from 6 a.m. to 5 p.m.