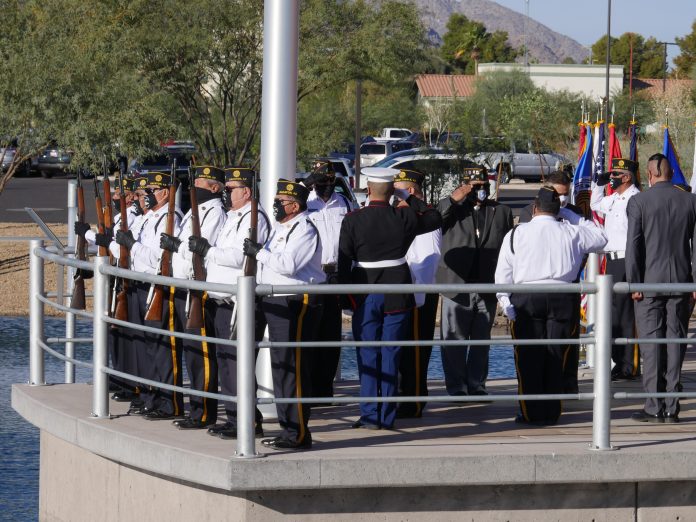 On a December day at the USS Arizona Memorial Gardens at Salt River on tribal land, a Pearl Harbor Day of Remembrance was held to honor the more than 2,400 people who lost their lives on December 7, 1941.

Many Salt River Pima-Maricopa Indian Community members, visitors and veterans were in attendance in person to pay their respects on the windy morning. Due to the COVID-19 pandemic, the event also was livestreamed in two parts on the Discover Salt River website. The first part was the ceremony at the Memorial Gardens at 9 a.m. Then at 10 a.m., the Pearl Harbor ceremony in Hawaii, “Above and Beyond the Call,” was also livestreamed on the website.

The event began with a welcoming address at 9 a.m., followed by a call-in of dignitaries, the singing of the national anthem in O’odham and the Pledge of Allegiance led by Miss Salt River Isabella Dockerty. SRPMIC Vice-President Ricardo Leonard then gave the invocation prayer and remarks, followed by words from SRPMIC President Martin Harvier.

The ceremonial activities began with a 21-gun salute, “Taps” and traditional flag breathing. After the laying of the wreath, Troy Truax Jr. gave the benediction as a veterans representative for SRPMIC, followed by closing remarks.

For Vice-President Leonard, this event brought back memories from when the American flag used in the ceremony, which had flown over the Pearl Harbor Memorial in Hawaii, was granted to the Community and American Legion Post #114 on October 12, 2007.

“Some of the [people] who were with us [in Hawaii] that day when we got the flag have since passed on. Mr. Robert Numkena gave feathers at that time and sang some songs. My son and I also sang some traditional songs for the people who had passed at that time,” he said. “Then, the survivors came and presented the flag to the vice-president, and he presented the flag to us. That was their wish, that every December 7, we remember those people who have passed on and will continue to pass in the future. Joel Jefferson was a strong part of this; he actually made the [initial] contact and thought, ‘Why don’t we as a tribe have a flag?’ It was an honor to be with them. I’m just happy to see this through and I know they would be too.”

The Memorial Gardens spans the exact length and width of the USS Arizona, with more than 1,500 commemorative columns outlining the actual perimeter of the ship. Each column represents the life of a service member aboard the ship on the day of the attack. There are gaps within the column outline that represent individuals who survived the attack. Each column illuminates at the end of the day, transforming the memorial at night and representing the continuation of the memories of each individual.

A restored Douglas C-47 that flew numerous combat missions during World War II took off from the Airbase Arizona Flying Museum at Falcon Field in Mesa and flew over the Memorial Gardens as a part of a Phoenix metro area flyover for the observance.

To view the ceremony, go online to http://www.discoversaltriver.com/uss-arizona-memorial-gardens-at-salt-river.

In addition to the ceremonies, a youth art contest was held for children in grades K-3, 4-7 and 8-12. Entrants could draw or paint an image in remembrance of Pearl Harbor or the USS Arizona.

Three winners from each grade level were selected by the Discover Salt River Tourism team, SRPMIC Veterans Affairs Team and through a people’s choice vote. Each winner received a $50 gift card to a Talking Stick Entertainment District partner property. Artwork was displayed for judging from 10 a.m. to 4 p.m. The winner will be announced at a later date.

January 6, 2021
The holidays are a special time for a lot of people. At the end of the year, the Salt River Pima-Maricopa Indian...

January 6, 2021
Santa and his elves came out to the Salt River Schools Food Services meal distribution drive-thru at the Early Childhood Education Center...

January 6, 2021
In a small community such as the Salt River Pima-Maricopa Indian Community, where we are all pretty much related, our cousins are...

How Tribal Nations Are Handling the Pandemic Across the U.S.

January 6, 2021
The U.S. Centers for Disease Control and Prevention (CDC) released a study on December 17 which shows that American Indians (AI) and...

January 6, 2021
During December, Salt River Pima-Maricopa Indian Community Council representatives discussed the use of medical and recreational marijuana.  During the...

The holidays are a special time for a lot of people. At the end of the year, the Salt River Pima-Maricopa Indian...
Read more

In a small community such as the Salt River Pima-Maricopa Indian Community, where we are all pretty much related, our cousins are...
Read more

After spring training, when the Arizona Diamondbacks move a few steps over to Phoenix and the Colorado Rockies make their mile-high trek...
Read more

MMA: Tate Girls on the Journey of Champions