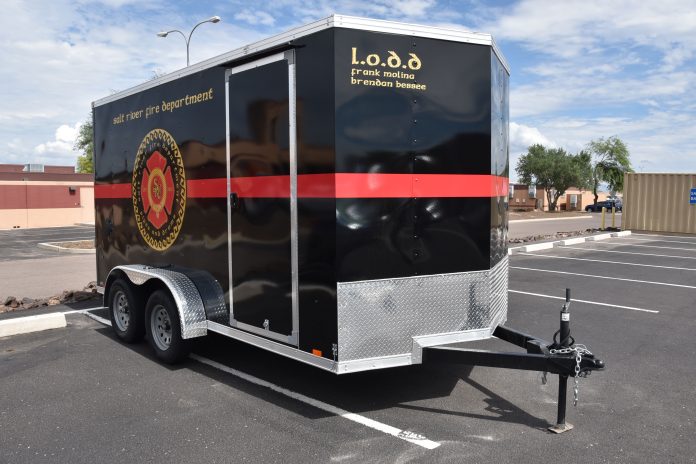 The Salt River Fire Department Pipes and Drums group has a new trailer to haul gear to a variety of events throughout the Valley and the country.

The $11,000 trailer came locally from Big Tex Trailers and will have enough space to temporarily store the drums and bagpipes, a toolbox so the group can work on their instruments, and pop-up tents, chairs, tables and other equipment.

Chandler vehicle outfitting company Pride Group provided the wrap for the trailer, which is designed with an all black background and features the Salt River Pima-Maricopa Indian Community seal, the Salt River Pipes and Drums logo, and a tribute to SRFD first responders Frank Molina and Brendan Bessee, who lost their lives in the line of duty.

Xavier Martinez, SRFD engineer and leader of the Pipes and Drums group, said that he created the trailer’s design himself, honoring the Community and Scottish and Irish cultures by blending traditions together.

As a Community member, Martinez wanted to incorporate the water design in the Maltese cross, or symbol of protection, with a traditional Scottish belt and the number 2018, the year that the Pipes and Drums group was established.

“I wanted to put the water design in there because we are the water people. It’s kind of hard to tie in the Native American cultures to the Scottish and Irish cultures,” said Martinez. “But if you compare them, they have similarities. The Scottish and Irish honor their fallen by playing the bagpipes. Natives use a gourd and sing traditional songs. They do the same thing and represent the same thing, but it’s just played out in a different way.”

Martinez said that as of right now, he believes his band is the first pipe band established on a Native American community.

Before establishing the band, Martinez admits he didn’t know much about performing or reading music. He had never played the bagpipes before, so he paid $100 a month for weekly one-on-one music lessons.

Martinez also took specialized music courses at the Northern Arizona University campus, where students auditioned for the instructors and were placed in a class based on their skill level.

“You could take a class on how to maintain the bagpipes, how to read music, and how to play traditional pibroch (a form of music for the Scottish bagpipes),” said Martinez. Currently there are six active members of the band, with five more on the way. The current members are Martinez and firefighter Colin Shaffery on bagpipes; engineer Chris Kenitzer, engineer Riley Murph and firefighter Eric Parr on snare drum; and firefighter Levi Jones on bass drum.