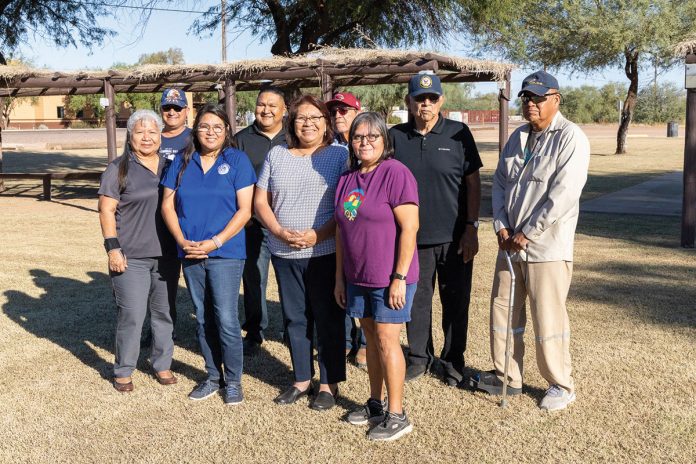 The Piipaash Matasheevm (People’s Gathering) has been staple among the Lehi Community since 1998, when Earl and Carolyn Stacey founded the event to celebrate the Piipaash culture on the Salt River Pima-Maricopa Indian Community. In the last issue of O’odham Action News, we touched upon the day of the event, on October 1 this year. Now we turn our attention to the committee that makes it all happen.

The gathering is a grassroots effort to preserve the Piipaash culture led by the Piipaash Matasheevm Committee (PMC), which sees many of its members playing crucial roles to host the event each year. The Piipaash Matasheevm held in early October takes on a greater meaning around what a community does when volunteers and the SRPMIC come together to produce an event of cultural significance.

The original event, the Spiritual Gathering of the Gourds, originated in the late 1990s and centered around bringing in traditional singers and dancers to perform. The focus always has been to honor the Piipaash ancestors who called the Community home and their descendants who live here today.

“I was born and raised here, so I have been involved with this since day one,” said Bob Aguilar, an elder from Lehi. “All of us have been involved in some way. We have been lucky to get together to push forward with what we are doing.” He said the gathering has progressed to a point of prominence in the Community and is one way of preserving the Piipaash culture.

According to Committee member Garfeld Nish, this work to preserve the Piipaash culture goes back to 1990, when certain songs were introduced into the Community from other tribes with relations to the Piipaash. “You know, we started gathering some young kids and teaching them to sing songs, and that’s how it … originated,” said Nish.

From there to the time of the original gathering held by the Stacey family, Nish took an interest in helping out with the annual event. Later, events were held two times a year. He said when it came to seeing how the gathering could thrive, it took a lot of legwork to get support from the Community and bring individuals with cultural knowledge to the table.

At the gathering area in Lehi, one can take note of the arbor that adorns the grounds, which is covered with arrowweed to give shade when the sun is at its brightest and gives way to the open circle where dancers and singers can perform.

“I got involved when it came to the construction of that,” said Alvin Lewis, a Community member and member of the PMC. He said it took a bit of effort to get the assistance from the Community to have the arbor built, but that the overall outcome came from the committee itself.

“We all banded together, and a lot of us knew about construction and working outside, so we knew that if we wanted it done the way we wanted, we would have to build it ourselves,” said Lewis. He said the craftmanship and ideas to incorporate a bench underneath the arbor were touches added by the committee.

Lewis alluded to the fact that the arbor is just one representation of what the gathering is about, but he hopes the lasting impact of the culture can live on as younger people get involved. “We’re trying to get everybody involved, no matter who they are, so that way [it will] live on for [at least] another 100 years,” said Lewis.

“I’m over 80 now, and we’re kind of getting up there in age. And you know, a lot of us won’t be around anymore at some point, but hopefully we can get the younger ones involved,” said Bob Aguilar, a member of the PMC. “We have invited younger singers to come to the gathering as well, and I think this last [event] was a success.”

Another PMC member and a relative of Aguilar’s, Garnet Gates, shared his experience with the gathering that goes back to when it was the Spiritual Gathering of the Gourds. He also talked about the work to get funding from the Community to build the arbor and how, in order to accomplish the project, it needed the know-how of the PMC members.

“We all came from the Colorado [River] tribes with all the tradition and culture because we all have a common connection between the tribes,” said Gates. He added that some people would like to see the event last longer or be held over a weekend.

“We are actually thinking of expanding it to two days, like other places where it becomes a weekend affair,” said Gates.

If the event lasts two days, then the committee can consider inviting more tribes to the gathering, not only tribes that share a cultural history with the Piipaash, but also other tribal groups from Mexico to northern Arizona.

Gates said that the event gets better every year, and the ladies who work behind the scenes make the whole event possible. They handle the coordination between the group and the Community and work with Council representatives like Michael Dallas and Deanna Scabby to get the support from the SRPMIC.