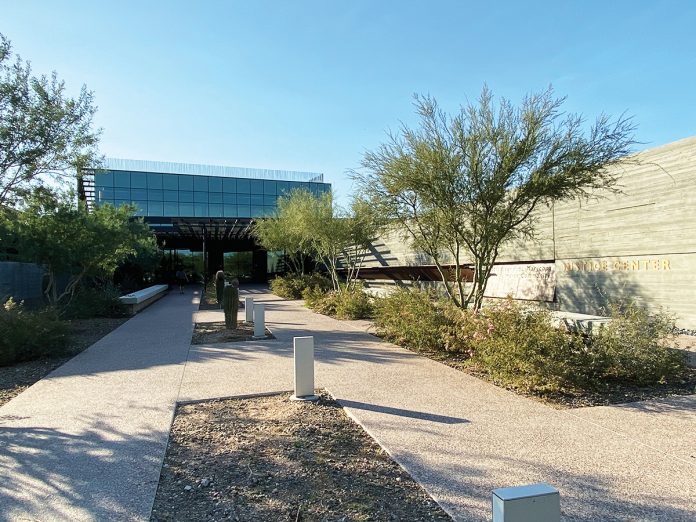 October marks National Domestic Violence Awareness Month across the U.S. In the September 17 issue of O’odham Action News, we wrote about what domestic violence is, how many forms it can take, and who can be a victim. Speaking with staff from Behavioral Health Services in the Salt River Pima-Maricopa Indian Community’s Health and Human Services Department, we learned that there are people at every step along the way to help victims of domestic violence with regard to seeking information and even guiding them through the court process and legal actions.

Officer Joseph Orozco from the Salt River Police Department walked us through the steps involved in handling a domestic violence case.

“SRPD’s No. 1 job when it comes to domestic violence is to preserve the safety of parties involved,” Off. Orozco said. “When we arrive on scene, we want to make sure that we have ‘made the scene safe’ by using our presence or by taking proactive measures to end any violent acts that may have been in progress. Once the scene is deemed safe and any required lifesaving or medical response has been completed, our officers begin their thorough investigation and interview involved parties as well as any witnesses who may have observed any actions.”

“Our officers understand that many times domestic violence is a traumatic incident due to the intimate nature of family members and domestic partners that are involved,” Off. Orozco said. “SRPD works closely with SRPMIC Child Protective Services, Family Advocacy Center and SRPMIC Crisis Teams. Using these resources, we are able to refer adults and children to any services they may need for support and follow-up after the initial incident.”

“A case could come to our office in one of two ways,” Breland said. “If someone calls 911 and the offender is located by police officers, the offender will probably be arrested. If the offender has fled or cannot be located, then officers will still submit charges to our office, and then we can request the court to issue either an arrest warrant or a summons to get that person into court.”

From here, the offender then enters the “initial appearance” hearing, where a judge will determine if “probable cause” exists. If the judge decides that it does, then the next step is arraignment, where the defendant pleads guilty or not guilty. Depending on the defendant’s decision, the next step can vary. Pleading not guilty will lead to a jury trial in which evidence will be presented; pleading guilty means the defendant admits guilt and will accept a plea offer.

While the court is a crucial aspect of making sure an offender goes through the legal process of getting charged, the court is especially focused on helping the victim of domestic violence. As Breland explained, “When these cases are new and still being investigated, we work with the Family Advocacy Center to quickly secure any services that the victim needs. The Domestic Violence Advocate at HHS also works with us, and [the Crisis Center] often helps as well.” Those services might include medical treatment, trauma counseling and money to help the victim in relocating, such as paying for housing, utilities, groceries and clothing.

“If the victim has children, we also work to make sure they are provided with services,” Breland added. “As cases progress through the system, we may seek assistance from BHS, HHS, Housing, Legal Services and other offices. Salt River is blessed with an abundance of resources, and we feel that it is part of our job not only to make sure that victims are aware of these services, but also that they know how to obtain them. We focus on a multidisciplinary approach to make sure that we are offering as much support to families as possible.”

Domestic violence is not an easy issue to talk about. Chief Prosecutor Breland knows this and added some important information regarding domestic violence.

“It is important to know that domestic violence relationships can also include financial abuse, sexual abuse and emotional abuse,” Breland said. “Abusers may even use reproductive coercion to control victims, either forcing them to become pregnant repeatedly, or forcing them to obtain abortions if they become pregnant. Even if a victim does not want to contact the police, there are many services and resources available, so the most important thing is to contact BHS for help.”

Both Off. Orozco and Chief Prosecutor Breland bring awareness to the rise of domestic violence abuse cases within the SRPMIC boundaries during COVID-19.

“As President Harvier mentioned, across the United States currently the COVID-19 epidemic has caused many financial issues due to the loss of jobs, furloughs, lockdowns and uncertainty due to the virus,” Off. Orozco said. “These added stresses, fears and close proximity have led to an increase in domestic violence, as many have been forced indoors with their families and domestic partners with little outlet. Unfortunately, these compounded stresses cause an increase in domestic violence incidents. Regardless of the stresses, it is never okay to commit these acts upon family or domestic partners and it has not deterred or changed how we respond to these incidents.”

“We have noticed over the past months that our domestic violence numbers have increased substantially during the COVID-19 pandemic,” Breland said. “It is hard to know for sure whether this is just a coincidence or whether it’s actually a result of people spending more time at home, exposed to their abusers. Either way, I want people to know that despite the constraints of social distancing, they are not alone, and help is available.”

Whether you’re a victim of domestic violence or not, if you have an idea for how to better support victims and encourage them to come forward to request help, please feel to email Alane.Breland@SRPMIC-nsn.gov or call her direct office number at (480) 362-5414.

October 14, 2020
As the fall and winter holidays are now around the corner, the Salt River Pima-Maricopa Indian Community members are wondering what their...

October 14, 2020
Q: What made you want to start your own business, and why did you choose this type of business?

October 14, 2020
The Arizona Travel ID driver license/ID card deadline was originally scheduled to go into effect on October 1, 2020, but due to...

October 14, 2020
The Salt River Pima-Maricopa Indian Community has about 20,000 acres of open range land that many animals call home, from bald eagles...

As the fall and winter holidays are now around the corner, the Salt River Pima-Maricopa Indian Community members are wondering what their...
Read more

Q: What made you want to start your own business, and why did you choose this type of business?
Read more

MMA: Tate Girls on the Journey of Champions