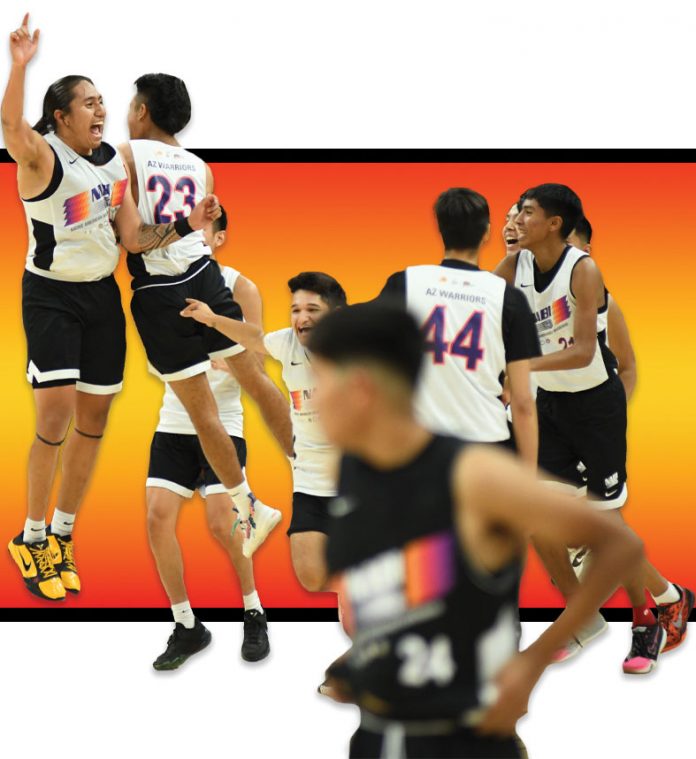 The annual Native American Basketball Invitational (NABI) attracted teams from across Indian Country to Phoenix for a week of hardwood action, July 18-23. This year marks the 19th year of the tournament, which took place at various gymnasiums around the Valley.

This year’s tournament fielded 68 boys’ teams and 68 girls’ teams, all of which competed for the championship in their respective divisions. The Salt River Pima-Maricopa Indian Community had a handful of teams whose rosters consisted of Community members.

On the first day of the tournament, the boys’ Ba’ag team started things off with a victory, besting opponent NW Hoopers by small margin of 68-65 to start NABI play on a good note. The game was back and forth until the NW Hoopers made a late push to get the lead and stay in front. Ultimately, Ba’ag would find their stride and regain the lead on a couple of free throws, while draining the clock down to get the win. However, for the Ba’ag team, their chances at a title run were stumped as their advance to the championships was ended by AZ Northern Footprint, 45-43, in the bracket phase of the tournament.

On the girls’ side, the AZ Lady Warriors looked to get their momentum going early against the TC Elite from Valley Lutheran High School in central Phoenix. The game was a tight race between both sides, as no one wanted to let the other have the lead for long. Unfortunately, the Lady Warriors lost their step late in the game, while fouls called by the referees sent TC Elite to the free-throw line to scoop up some extra points. With time not on their side, the Lady Warriors settled for a loss heading into bracket play. Although the AZ Lady Warriors were able to bounce back during a later game against M&M Academy, they exited the tournament at the hands of Zona Soldiers, falling 41-39.

Next up was AZ Warriors Red, who put on an impressive display out on the court at the Camelback High School gymnasium against their opponent WE R1. In that contest, the AZ Warriors held their own against WE R1 in another close game that got down to the wire. With a few late-game resurgences, the AZ Warriors held WE R1 at arm’s length until the there was no more time on the clock for WE R1 to make any late comebacks. With that effort, it would send them into bracket play, where they won 55-44. In another close matchup to advance in the bracket, AZ Warriors would face stiff competition from White Hillz in a hotly contested game that came down to a 2-point difference. In the end, the AZ Warriors were eliminated from the tournament 45-43, while White Hillz moved on.

Elsewhere in the NABI Tournament

Fort McDowell had some SRPMIC representation; the team was undefeated in pool play and won their first bracket game by forfeit. They also won their second bracket game, but they were ultimately defeated by Northern Elite and pushed down to the loser’s bracket. In their third game in the loser’s bracket, they were defeated by the Oklahoma Runners, losing by only 1 point, 63-62.

Ba’ag 2023 played five games, losing in their first bracket game and moving to the loser’s bracket. Unfortunately, they lost to White Hillz in another close battle, 59-62.

In the girls’ division, Natives With Talent (NWT) made it to the final four. The girls went head-to-head with Oklahoma team Legacy Elite; Legacy Elite defeated NWT, 45-51.

“It felt better; we had more chemistry with everything—passing, cutting, shooting. It was a good overall year,” said Angelina Montoya of NWT. “I look forward to playing with this same team and having the chemistry.”

For one of the team’s seniors, Nyese Jones, this was her last year playing in NABI, as she is moving on to the college level. She hopes to help her father, NWT head coach JJ Jones, with coaching duties in the NABI tournament next year.

“We made it farther than we did the last couple of times we played,” said Nyese Jones. “It’s a little bit sad that we lost, but we were in the top four teams out of 68 teams in the girls’ division, and we were able to get our name out there.”

The AZ Warriors went undefeated in this year’s NABI tournament, winning 10 straight games. They beat Northern Elite on the Phoenix Suns and Phoenix Mercury home court at the Footprint Center on Saturday, July 23. The team’s players represent Native American tribes including the O’odham, Hopi, Navajo, Apache and Klallam. This is the third NABI championship title for the intertribal basketball team, which won back-to-back in 2015 and 2016.

Robert Johnston, coach of the champion AZ Warriors, said, “This is one of the things I just had to show up to. My staff and coaches have done an excellent job working with these kids and making things happen. [G]etting these kids prepared and letting them play the sport—that’s what it’s really all about. I am just happy to be here with everyone, and I look forward to working with the next generation of children. For the ones who are ready to play, our coaches are ready for them and to help them develop.”

Although some of the teams did not make it to the finals, their hard work in playing every game demonstrated how much basketball is life for youth from Salt River. Congratulations to all the SRPMIC teams for coming out and representing the Community throughout a week of tournament basketball.