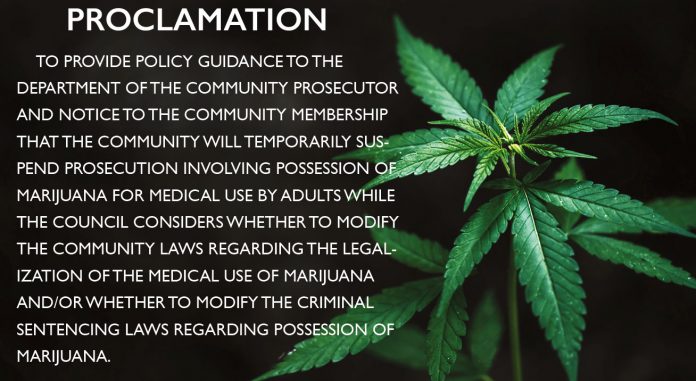 On December 8, in an effort to re-evaluate the Salt River Pima-Maricopa Indian Community’s legal position regarding medical marijuana, and also possibly recreational marijuana, the Community Council, in a vote of 8-2, passed a medical marijuana proclamation that temporarily suspends any prosecution involving possession of marijuana for medical use by adults.

Investigation and prosecution of possession of marijuana for sale is not affected by this guidance and will proceed as usual.

However, marijuana is still illegal in the Community, according to Assistant General Counsel Jeff Harmon.

“It is a Class B offense, which means the penalty could range from a $5,000 fine all the way up to one year in jail. Now that’s the maximum,” Harmon said at Council member Cheryl Doka’s District C meeting on January 8.

“When you look at the effects of the various drugs that we see in the Community, marijuana is generally considered by practitioners, courts and judges as one of the lower offenses, if you were to put all the drugs on the scale and analyze how [they affect] behavior and other criminal matters,” Harmon said.

What Council has been more recently considering is possibly downgrading the criminal penalty for possession of marijuana to class C, D or E, which are less serious offenses and would distinguish marijuana from methamphetamine, fentanyl, opioids, heroin and other hard drugs.

As of now, the SRPMIC Health and Human Services Department and the doctors employed by the Community will not issue a letter indicating that an individual may use medical marijuana for any condition. Because the Community currently receives federal funding for health operations, and marijuana is illegal on the federal level, the Community doesn’t want to jeopardize the funding.

“If an employee of the Community tests positive for marijuana, there are some sanctions for that, up to and including termination. It depends on each situation and what action is taken by the department involved and Human Resources,” said Harmon.

Currently, say that a medical marijuana user in the Community is on their way home with the legally allowed 2.5 ounces or less of marijuana in their vehicle and gets pulled over for a minor infraction, such as a taillight out. If the officer determines that they are in possession of marijuana, they can present the officer with their medical marijuana card or verifiable letter from a physician.

“Most likely [the officer] would process your information and send it to the prosecutor’s office. They would likely let you go about your business, and if you meet the standards of the proclamation, no criminal case will be filed against you,” said Harmon. “We wanted to put something out there temporarily to give individuals who could benefit from the medical use of marijuana some personal reassurance that it will be okay in the meantime, if you’re following the rules, while Council makes bigger decisions on the topic overall.”