Home News Sports Lady Warriors make it to the Elite 8 of the 6A State... 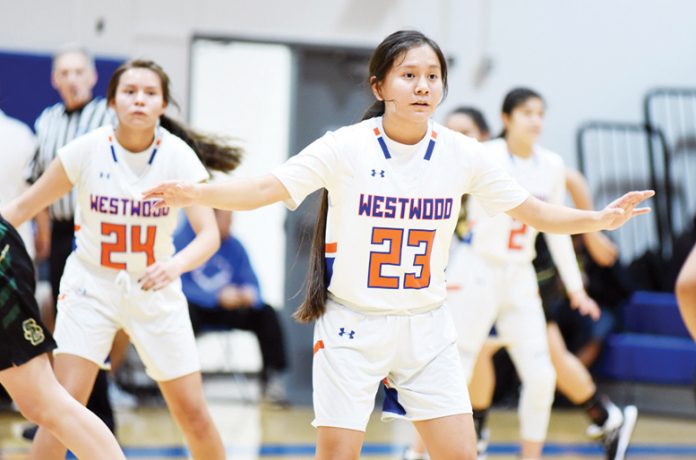 The Westwood High School Girls Basketball finish their season ranked number 1 in the East Valley Division as they fell five points short to the Pinnacle Pioneers in the second game in the 6A high school quarter finals on Thursday, February 20.

The Lady Warriors made it to the Elite 8 of the State High School Tournament and played their first game against Xavier Prep on their home court, the stands filled with family, friends and classmates as they cheered the team on to defeat the Gators. The Lady Warriors went on to beat the Gators 47-42. In the second game of the quarter finals the Lady Warrior’s went up against the Pioneers in a head to head battle to move on to the next level of the quarterfinal for the state championship title.

The Warriors with a mostly all Native American team under five-foot- eight inches brought rez ball to the scene, battling with Pioneers throughout the entire game the Warriors started off behind with a score of 10-2 in the first quarter, the Warriors slowly made their way up to a tied game by the second quarter. In the third quarter the Pioneers crept their way back to the top leading the score board. In an attempt to catch up the Warriors hit threes and fell behind by two points in the last two minutes of the game, but after fouls resulting in a number of free throws by Pinnacle made their way to the top of the score board beating the Warriors by five points 51-56.

“Thank you for the best season ever at WW,” said SRPMIC member and father of Morning Star and Kristine Scabby, Robert Scabby in a Facebook post after the game against Pinnacle. “These Lady Warriors are champions in my eyes! I’m so proud of these ladies!”

Dental Suite at River People Health Center to Be Run by...

May 6, 2021
With the River People Health Center slated for a November construction completion, the yet-unnamed dental suite housed on the second floor will be run...

Great Wolf Lodge Arizona Recognized as Lodge of the Year

May Is Stroke Awareness Month

Great Wolf Lodge Arizona Recognized as Lodge of the Year