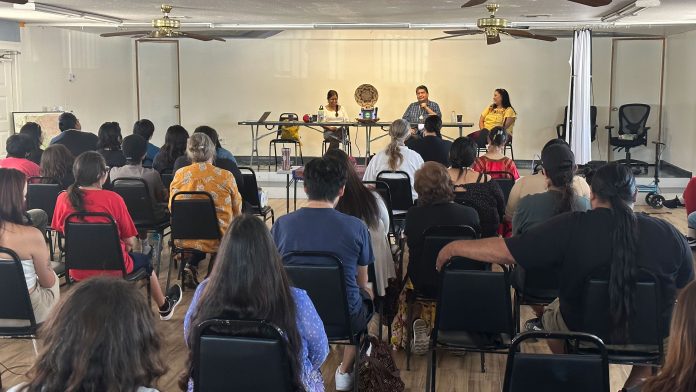 This year the theme was “Against All Odds, We Still Exist,” and IPDAZ event organizer Laura Medina said that the goal was to go back to the original intent of the first event: to connect with the community and hold discussions on important topics.

“Since that time, our community has grown and the issues have remained. Colonization has never ended, but at least we are more aware of its impact,” said Medina. “We definitely try our best to center O’odham land and people [in our program]. As an Ojibwe, it is my responsibility to uphold being a good relative on others’ traditional territories.”

The event started on Saturday, October 8, with a community cleanup project at the 7th Avenue Trailhead at Rio Salado. The cleanup was sponsored by Keep Nature Wild and Chispa AZ.

The next day, participants and organizers met at the Steele Indian School Park by the Phoenix Indian School visitor center for the Day of Movement Spiritual Run, a half-mile walk involving prayer with spiritual runners.

The day began with the IPDAZ Conference, which featured three panel discussions. The first panel was “Whose Land?” during which attendees learned about the territory of Phoenix from O’odham and Piipaash organizers and knowledge holders.

Chuvak “Cloud Feather Mist” Montiel-Nunez, an enrolled member of the SRPMIC, was a part of the panel, and she shared her experiences growing up next to settlers who moved on O’odham land bordering the present-day boundaries of the Community.

“There are a lot of Americans who oppose the border wall, but they don’t see all of the borders that aren’t walls that are separating the O’odham right now,” she told attendees.

The second panel was “Voices From the Frontlines,” which included updates from land and water defenders locally and from throughout Turtle Island. The third panel was “Native Creatives,” a discussion with Indigenous content creators, musicians and entertainers.” At sundown, performers took the stage, and SRPMIC band Ramoncito & Company provided entertainment.