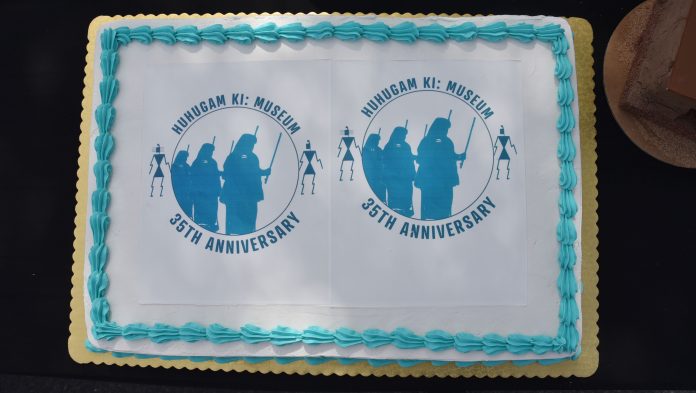 On November 5, the Huhugam Ki: Museum celebrated its 35th anniversary with a special gathering held outside the museum by Two Waters on the Salt River Pima-Maricopa Indian Community.

Achin explained the origins of the Huhugam Ki: Museum, referring to former SRPMIC Vice-President Alfretta Antone’s advocacy for the museum. “Her original vision was to continue the preservation of the O’odham and Piipaash culture, history and practices. All of that is the culmination of what a museum does: [show] who we were and who we are as a people.”

Before the event kicked off, Antone’s daughter, Cecilia “Tweety” Antone, spoke about her mother’s involvement with the museum.

“About 40 years ago, when the late Mrs. Antone traveled representing [the SRPMIC], she visited many reservations, and all of them seemed to have a really nice museum,” said Cecilia Antone. “She really wanted this museum. The Youth Home was coming to an end, and there was going to be this building [available] that she thought would be perfect for [the museum].”

At the time, Antone asked Council if it would be possible to establish a museum for the Community. Council unanimously said yes, and they put Antone in charge of the process.

“They didn’t have any assistants or Community managers to delegate anything, so she had to do all the footwork herself. It was a mission, let me tell you,” said Cecilia Antone.

Thirty-five years later, the mission continues, and there is a lot for the Community to celebrate.

During the anniversary celebration, food and art vendors lined the parking lot. Next to the Olas Ki (round house in O’odham), Community artists showcased how to make traditional pottery, beadwork and basketry.

Preservation archaeologist Allen Denoyer from Archaeology Southwest provided a hands-on demonstration at the Olas Ki on how to refurbish or reconstruct a round house, by packing clay, stretching out willows and thatching arrowweed.

Behind the museum, fresh tortillas (cemait in O’odham and modiily in Piipaash) were prepared over a fire and given to the guests. People then lined up inside the museum, where there was a photo booth set up for memorabilia.

In front of the museum was a booth where people could write a future wish and have it added to a time capsule to be buried now and opened on the 50th anniversary of the museum in 2037.

Next to the museum there was a demonstration of the Peon game, a hand game where two opposing sides guess which hand of each player has a piece of bone or wood.

Michael Chiago attended the event to hold a book-signing for his recently published book, O’odham Lifeways Through Art, a collection of his paintings which illustrates the lives and traditions of the O’odham and demonstrates the influences on O’odham culture. At the end of the event, everyone enjoyed a cake commemorating the 35th anniversary of the museum. Afterward, the Gila River Dance Group and Salt River Dance Group performed basket dances.