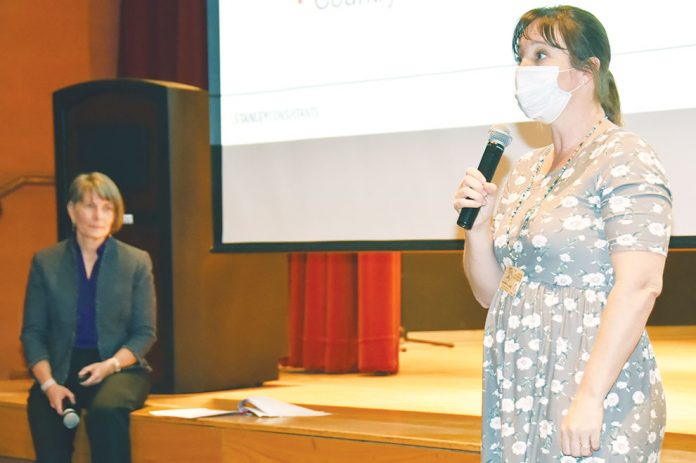 On April 28, Salt River Schools hosted an informational meeting about the Safe Routes to School initiative, a plan to study how students travel to school and how to make the journey safer and easier for those who walk or ride a bike.

Family input was the goal of the event, which was held at the Accelerated Learning Academy’s Lecture Hall and streamed live online. The initiative is a partnership between the Salt River Pima-Maricopa Indian Community Public Works Department, Stanley Consultants and the Maricopa Association of Governments.

Parents and guardians completed a survey about their students’ commute to school. The information received from the survey will be used to improve safety for kids who walk and bike to school in the Community.

“We have the privilege of having a group with us that has been gathering some data for us to find out the safest ways for kids to come to school. We’re looking at other ways to help our kids get to Salt River Elementary, as well as the [Early Childhood Education Center] and ALA,” said Salt River Schools Acting Interim Superintendent Dr. Vicky Corlett. “That might be looking at scooters and skateboards as well as bikes, or just walking to school and making some safe routes for them to do that. We want to be able to create a community school within the Community.”

To help make routes to schools safer, the initiative uses the “6 E’s”: engagement, equity, engineering, encouragement, education and evaluation. Within the Community, another “E” will be used: Enforcement will be added to improve driver behavior and enhance drivers’ awareness of traffic laws.

“[The Salt River Police Department] is involved by having an officer identified as the dedicated School Resource Officer, who frequently visits the school as well as providing information about things such as crashes and any other unsafe behavior or traffic regulatory violations in the area,” said Tim Cason, civil engineer at Public Works–Roads. “When it comes time to review the draft report later this year, SRPD feedback will be invaluable because they can provide insight on the real-world impacts of the recommended actions and also identify potential shortfalls of taking too much action.”

Some families in attendance noted safety issues that they are concerned about. Dushane Fred is the parent of two ALA students and a fourth-grade student at SRES, and he explained what he feels is needed to keep the Community’s children safe.

“More crossing guards and speedbumps to help [enforce] the speed limit,” said Fred. “There’s always traffic going way too fast as you get closer to the schools, especially when you see the kids in the morning and after school. It gets kind of crowded. Where the sidewalks abruptly end, they could also extend them all the way.”

Sidewalks also were brought up by Lewandowski, who presented a slideshow with examples of how difficult it can be currently for students traveling to school by bike or scooter on uneven ground. The photos showed where sidewalks end and where there is simply a lack of sidewalks on the way to school.

After gathering information, identifying issues and finding solutions, the next step of the Safe Routes to School initiative is to present a plan to the Community in August. After that, steps include getting the plan funded, acting on the plan, and evaluating the plan to make changes as needed. The full scope of the project could take a few years to implement after it is approved.

“As we gather the Community responses, it will give the study team a clearer picture of not only what is happening, but also what is desired from parents in the Community, and what the attitudes are towards particular modes of travel to and from school,” said Cason. “With this information, an analysis of the responses will ultimately be compiled into a draft study, which will contain recommendations on ways to improve any unsafe conditions as well as new programs and processes that could be implemented to increase the number of students walking and biking to school and decrease the number of drop-offs.”

The initiative hopes that decreasing the number of drop-offs will reduce the congestion of car traffic at the schools. For more general information, visit the National Center for Safe Routes to School website at www.saferoutesinfo.org. For information as it pertains to the Community, visit www.saltriverschools.org/news/what_s_new/srts2022.