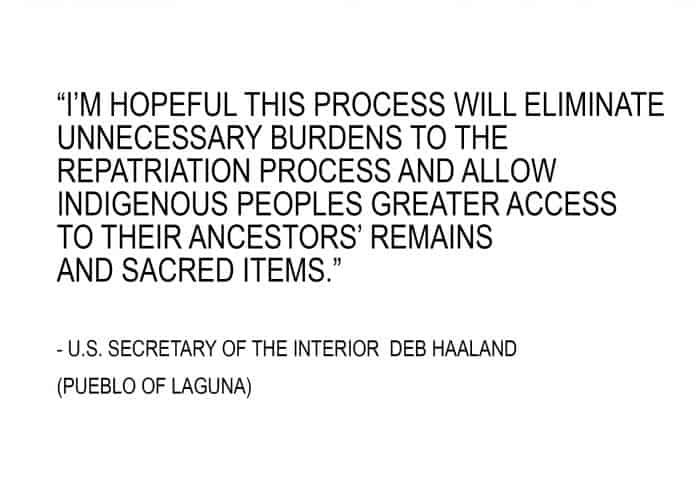 On July 15, the Department of the Interior announced that it will conduct consultations with tribal and Native Hawaiian community leaders as part of an ongoing review to update Native American Graves Protection and Repatriation Act (NAGPRA) regulations after repeated requests for substantive updates to NAGPRA regulations since 2010.

The deadline for leaders to submit written comments was on September 30.

NAGPRA was enacted in 2010, and it provides a process for the disposition and repatriation of Native American human remains, funerary objects, sacred objects and objects of cultural patrimony back to lineal descendants, Indian tribes and Native Hawaiian organizations.

The Secretary of the Interior is responsible for implementation of NAGPRA and it issues regulations to interpret the law.

Current Secretary Deb Haaland (Pueblo of Laguna), who is the first Native American to serve as a cabinet secretary, said that changes to NAGPRA regulations are long overdue. “It is crucial that as we consider changes, we consult with tribes and Native Hawaiian communities at each step,” said Haaland.

“I’m hopeful this process will eliminate unnecessary burdens to the repatriation process and allow Indigenous peoples greater access to their ancestors’ remains and sacred items.”

Based on community input and previous consultations, the Interior Department has prepared a draft proposed rule which seeks to:

Principal Deputy Assistant Secretary of Indian Affairs Bryan Newland (Ojibwe) said that the repatriation of human remains and sacred cultural objects, and the protection of sacred sites, is integral to preserving and commemorating Indigenous culture. “As the Department continues its work to confront the history of federal boarding schools—including returning the human remains of Native children to their families—we will implement the policies and requirements of NAGPRA to address tribal concerns,” said Newland.

September 30 was the National Day of Remembrance for U.S. Indian Boarding Schools. On this day, the Department of the Interior announced it would begin tribal consultations as the next step of the Federal Indian Boarding School Initiative, which is a review of the legacy of federal boarding school policies. This review will result in a final written report on the investigation to the Secretary by April 1, 2022.

“I launched the Federal Indian Boarding School Initiative to begin the long healing process that our country must address in order to build a future we can all be proud to embrace. As we move forward, working with tribal nations is critical to addressing this legacy with transparency and accountability,” said Haaland. “Tribal consultations are at the core of this long and painful process to address the intergenerational trauma of Indian boarding schools and to shed light on the truth in a way that honors those we have lost and those that continue to suffer trauma.”

The topics that participants are requested to address include appropriate protocols on handling sensitive information in existing records, ways to address cultural concerns and the handling of information generated from existing records or from potential sitework activities, the management of former boarding school sites, and NAGPRA.

NAGPRA has a seven-member Federal Advisory Review Committee that monitors and reviews the implementation of NAGPRA. Committee members are appointed by the Secretary of the Interior from nominations made by Indian tribes, Native Hawaiian organizations, traditional Native American religious leaders, national museum organizations and national scientific organizations.

One of those committee members is Barnaby Lewis, the historic preservation officer at the Gila River Indian Community, who was nominated by all four O’odham sibling tribes. Lewis’ term ends on May 10, 2022.

On August 13, in a Zoom meeting for a tribal consultation on draft updates to the regulations implementing NAGPRA, changes to the act were discussed. After noting that current regulations have a lack of instructions or requirements related to a duty of care, deadlines or delivery of documents, National Park Service National NAGPRA Program Manager Melanie O’Brien said that an attempt to solve that problem would be to address these issues and to hold museums and federal agencies accountable for that duty of care, as well as meeting those deadlines.

Simplifying and prioritizing cultural affiliation was also a major proposal in the meeting. The way the regulations are currently stated, O’Brien said that there can be a perceived higher standard for identifying cultural affiliation that goes beyond what is in the Act. This would provide clear instructions for museums and federal agencies to assist in resolving cases of multiple culturally affiliated tribes who make competing requests for cultural affiliation or repatriation.

Cultural Compliance Supervisor Angela Garcia for the Salt River Pima-Maricopa Indian Community was on the Zoom call and commented about agencies consulting with tribes ahead of any activities that would disturb land to identify potential discoveries. Garcia spearheads the NAGPRA consultation for the SRPMIC Cultural Preservation Office. “Agencies really do need to make a better effort ahead of time before their discoveries, and I don’t want to give them any reason to go ahead without identifying all of the alternatives to avoidance,” said Garcia. “And I think that is an issue that we’ve dealt with quite a bit, that there isn’t enough prior consultation to ground disturbing activity. Our whole goal with NAGPRA is to avoid having to repatriate. So, I think we need to do more prior to any kind of discoveries.”

The entire metro Phoenix area is one huge archeological site, and when unintended excavations of a local burial site or other sacred objects on non-tribal or federal land make the news, SRPMIC Tribal Historic Preservation Officer Shane Anton makes it known to media outlets that the SRPMIC does not release information about burial discoveries or cultural resource discoveries for several reasons. “Understandably, the first and foremost concern is that publicizing archaeological discoveries before a project is complete makes them vulnerable to disturbance or looting,” said Anton.

“This is an issue for all archaeological sites. In cases of burial discovery, it is particularly important to safeguard them from damage, because burials are the remains of human beings who continue to deserve respect and dignity. Also, it is a violation of traditional religious beliefs to take photos, video or other imaging of human remains, funerary objects and certain other types of discoveries.”

For burial-site discoveries within the City of Phoenix, the city and the U.S. Department of Housing and Urban Development consult with the tribe.

Once there is a discovery of remains, Anton said a blessing is given, and “it is explained that we are sorry that [the Huhugam] have been disturbed and displaced and we are your living relatives. We will provide you a new home so that you can continue on in peace with this part of your journey. We just communicate our sorrow about their displacement and try to reassure them we are working on their behalf.”

In the Community, there is an annual reburial ceremony on the first weekend of June, which is limited to Native American Community members.