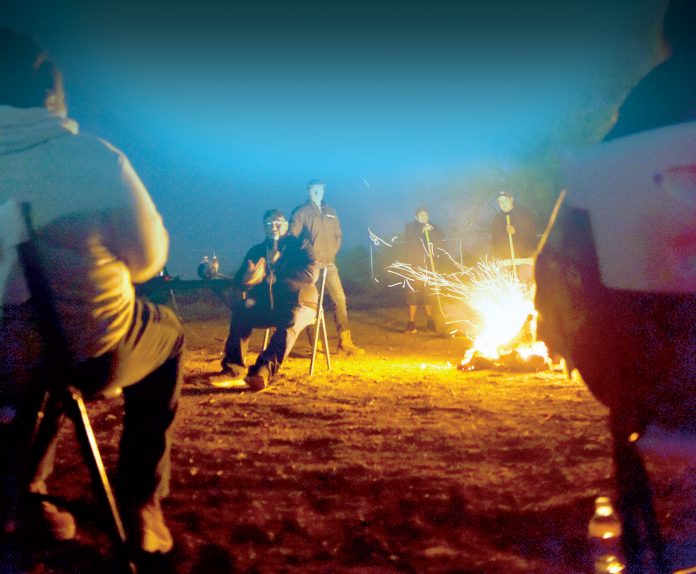 On January 24, the Cultural Preservation Division of the Salt River Pima-Maricopa Indian Community Cultural Resources Department hosted Winter Storytelling in the Community Garden, led by Michael Ennis of the Tohono O’odham Nation. The event had a great turnout, with a good number of Community members, visitors and staff. Department staff members served food and provided warm coals from the fire to those who wanted more protection from the evening’s cool temperatures.

Prior to the storytelling, Cultural Preservation Program Manager Shane Anton greeted everyone and shared the reason why the O’odham people tell their stories in the winter.

“In our traditional beliefs, when we were able to communicate more with the animals, the rattlesnake was the protector of our stories. The rattlesnake hibernates in the winter, and therefore in the winter we can tell our stories because he is sleeping,” said Anton. “If you tell a story outside of those boundaries, something may happen to you. The rattler has the ability to bite you; you know how venomous the snake is and how quickly you can get sick from that. So we try to stick to that restricted adherence of cultural protocol in the winter.”

Anton also explained that the stories the O’odham tell don’t really have any underlying moral or purpose behind why they are told, like the tales told in the dominant society. The stories are told and the listener gets what they get out of it.

Donald Santeo provided the blessing prior to the event, and Anton explained to the visitors in the Community why it was tradition to serve the people food.

“What we try to do with all these things is to revive our culture, through language, storytelling, protection of our cultural sites, and instilling knowledge into our youngsters and letting our people know who we are,” said Anton. “In the time of our ancestors there would be villages, and they would go from village to village and we would usually send our runners. [The runners] would have to run long distances, so it’s always customary at any time you get visitors to feed them, and in a sense that is what we want to do for you tonight.”

There was coffee, hot cocoa, stew and bread for all to enjoy as they got ready to listen to Ennis tell traditional O’odham stories.

Ennis started his storytelling with a couple of O’odham songs, one about the evening and one about Frog Mountain (Mount Lemmon in Tucson).

“It’s a happy time that the evening has fallen above the people and knowing tomorrow will come and something good will be on the land,” said Ennis.

Ennis used the songs to start the storytelling, beginning with creation legends of how the Earth, the people, death, the sun, moon and stars came about.

Prior to the stories, Ennis explained that he started learning the O’odham stories from his Community elders through songs and asking a lot of questions. He also explained that each O’odham community tells these stories in its own way; some have more humor, and others incorporate more details and ways of having a listener think and open their minds.

Below is only a portion of the story that Ennis shared that night, if you would like to hear the whole story please attended the next O’odham Storytelling at the Community Garden, featuring Barnaby Lewis of the Gila River Indian Community, scheduled for Thursday, February 21, at 5:30 p.m.

The Beginning Darkness and water are how it all began. A giant turtle lived and on its shell was a child. It moved around in the water, and the first child was left on the water. The turtle moved away from the child and back down into the water.

The wind came and helped take care of the child. Over time the child grew, recognized its body and picked up dirt; over time the dirt accumulated and the child made a ball. The child would pat the ball of dirt and make a disk like a cemait (tortilla); over a long period of time the disk became big enough to be placed on top of the water. The child rolled onto the disk in the water and learned to crawl and walk on the disk, making it bigger.

The child became a man, known as the Earth Medicine Man, and he created segoi (greasewood). The segoi had termites, and they were given the job to help make the land larger. The termites would push out the disk, which became the land and Earth. The spider was created and tied the disk and the darkness together with his web.

All those people started to go to the east, and somewhere out there was a man known as I’itoi, “Elder Brother.” He heard this sound and saw all these people and asked them where they were coming from. They told him there was another land and something happened and they saw a light and headed in that direction.

Elder Brother and Earth Medicine Man came together. They created a fire and sat there talking for a long time. Elder Brother took some of the water and put it close to the fire, then he threw it upward to the east, creating the sun. He spit more of the water into the sky and created the stars. Because the stars didn’t give off much light, he created the moon.

December 3, 2021
Tempe Butte in downtown Tempe, also known in O’odham as Oidbaḍ Do’ag and in Piipaash as Xwe Nyakuuly, is a culturally significant site for...

Community Recreation Employees Move On After Years of Service

Yoga in the Outfield at Salt River Fields